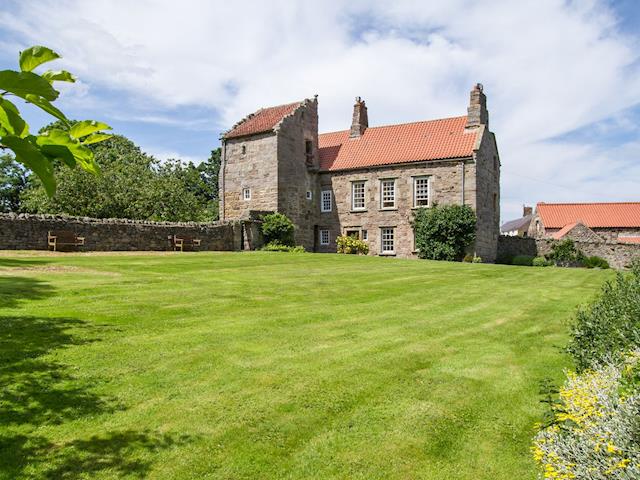 Grade II listed country hall with an intriguing history and an abundance of period features. Stunning views towards Dunstanburgh Castle.

. This exceptional, Grade II listed, ten-bedroomed country hall lies in an AONB, just outside the picturesque coastal village of Craster, on the coast of Northumberland.

Parts of the existing pele tower may date from the 11th century, and the rest of the house was built in the early 14th and 18th centuries, with the 18th-century wing rebuilt in the early part of the 20th century. The pele tower was rebuilt around 1310 as a watchtower for the nearby Dunstanburgh Castle, which was then being constructed. The unusual crowstepped top floor of the tower was created in the 16th century, when the then owners were no longer worried about maintaining defensive strength, and it was converted into a pigeon loft. Some of the fireplaces and stonework come from the lost Tudor house of Gloster Hill.

There are spectacular coastal views to the east towards Dunstanburgh Castle. The beautiful beach at Embleton Bay is a mile or so north along a pretty bridleway. An excellent holiday base to enjoy the marvellous beaches, dunes and walks of the Northumberland coast. There is a wealth of historical and recreational sites, including Alnwick Castle and Garden, Bamburgh, Holy Island, Farne Islands, Warkworth and the Cheviot Hills. Craster itself is world famous for its kippers. Golf available locally. Shops ¾ mile, pub 400 yards.